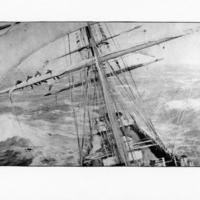 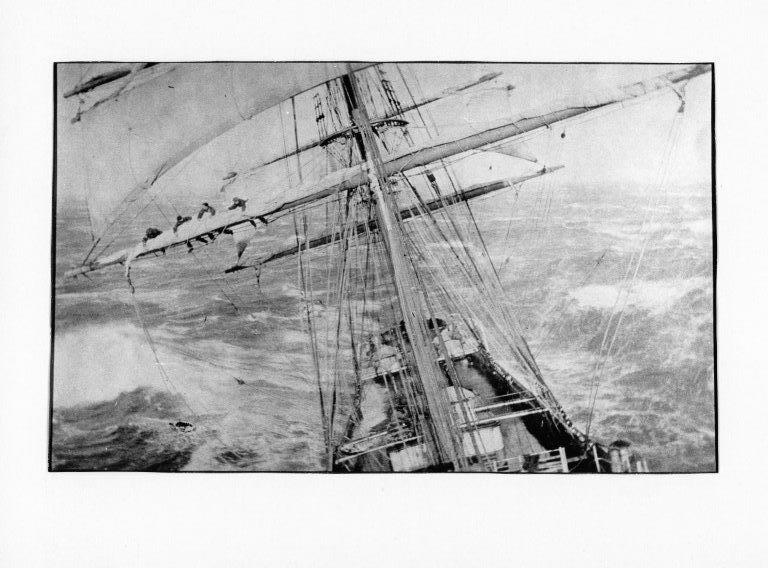 You can comment on this image by viewing it under "Browse Items" to the left.

This photo was obviously taken in the days before "Safety at Sea" seminars and before the advent of self-furling sails. It dates from 1904 or 1919, depending which source you read and was taken by a Canadian photographer, Frank Leonard (1870-1944).

The barque Garthsneid of Montreal was at Cape Horn when one of its notorious storms hit. The four sailors had reefed the main and the vessel was taking on water. One can only assume that the rest of the crew were below, manning the pumps. The four sailors had to hang on or they would have been hanging by their feet from the rope or plunging into the rough sea. Over the years, the improvements to safety equipment (including safety harness, self-inflating life jackets, MOB personal location devices, etc.) meant that occupational safety rules precluded this sort of misadventure. The photo enforces the old adage -- reef early, reef often.

“Reefing” in sailing is a technique to reduce the surface area of a sail. This is done by folding or rolling one edge of the sail in on itself. This helps sailing vessels handle strong winds by improving stability. It is used as a safety precaution in rough weather.